During the nineteenth century the American patent system required the submission of a model so that inventors could secure patents. Inventing a better mousetrap, by Alan and Ann Rothschild, tells their story through the models that they have collected into their own museum, which has 4,000 examples.

The British patent system never had such a requirement, although some were still submitted. These are in the Science Museum in London but, I was told when I enquired, could not be readily identified. The American models had a chequered career and many were lost or dispersed.

So, what do I think of the book ? I thought that they did a superb job, exhibiting the whole world in miniature. The passion that they have for the subject is evident. Numerous models are illustrated with colour photographs and a description of how the invention worked, The detail, wow the detail ! The book is packed with the kind of quirky details that I, and I'm sure many others, find fascinating. I thought from my career as a patent specialist at the British Library that I knew a lot about the old American patent system but I kept on learning new things here.

Here's one of the illustrated models. 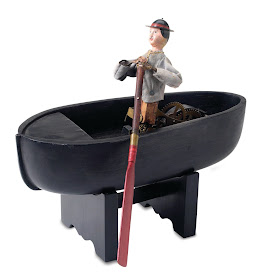 The book begins with a chapter outlining the history of the patent models, including how Alan first became interested in them, coming across them by chance at a sale in 1994. Then there are 22 themed chapters by topic -- I loved the idea of a chapter on Alcohol, Tobacco and Firearms, a joke on a federal law enforcement agency. There are even detailed instructions on how to reproduce six of the models.

Knowing the story of how Abraham Lincoln, the only President to hold a patent, had whittled a model out of wood before the eyes of his law partner, I had assumed that most models were crude, simple things made from wood which showed the general look. Judging by the models in this book, many were carefully made and even worked properly, and were made out of a variety of metals. They are works of art, so those interested in art as well as those in the history of technology will find this book fascinating. Here's a sample page, on cigars. 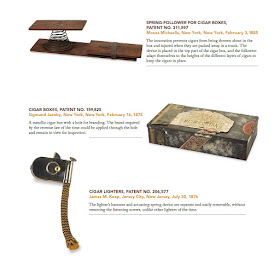 To add to the interest, the models had tags giving the patent numbers so that the printed patents can be referred to, and the identity of the inventor known. That greatly enhances their interest. What is unlikely to be known is if the item was actually made, let alone was it a success, as the patents don't tell us that.

I liked the book so much as a PDF that I ordered a copy which is now on my bookshelf. Copies are available from for example the UK Amazon website.

The Rothschild-Petersen Patent Model Museum itself can be visited in upstate New York.  Pity, I'm unlikely ever to make it there.